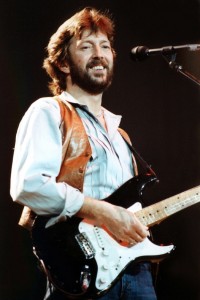 Eric Clapton, the first guitar hero of the 1960s, celebrates his 70th birthday today. Clapton will mark the occasion with shows on May 1 & 2 at Madison Square Garden, a venue where he has appeared over 40 times, and follow that with 7 shows at London’s Royal Albert Hall May 14-23.

Clapton’s blues-based guitar work first came to light after he joined The Yardbirds in 1963. He followed that with stints in John Mayall’s Bluesbreakers, Cream, Blind Faith, and with Delaney and Bonnie Bramlett. Clapton’s master work, Layla, with Derek and the Dominos including Duane Allman, was released in 1970. In 1992, his album Unplugged became his top-seller and won six Grammys. Clapton is the only three-time inductee into the Rock ‘n’ Roll Hall of Fame — as a solo performer, and as a member of both The Yardbirds and Cream. Rolling Stone has named him second best guitarist of all time (behind Jimi Hendrix). A career-spanning greatest-hits compilation, titled Forever Man, is scheduled for release May 11.

In June of last year, Clapton revealed that he is considering retiring from the road, having found touring “unbearable” in recent years. “It’s become unapproachable, because it takes so long to get anywhere,” he said. “It’s hostile – everywhere: getting in and out of airports, traveling on planes and in cars.” He said that time away from the road would lead to him committing more time to making music in the studio.

On his way to 70, Clapton has overcome heroin addiction, alcohol addiction and the death of a child.

70 Reasons Eric Clapton is an icon