It was raining in New Orleans when we woke up at around 8a on Day 2 of the second weekend of Jazz Fest.  We checked the weather, and all sites agreed it would clear up around mid-day.  By the time we were ready to leave the house, the rain was gone, though it was still cloudy. 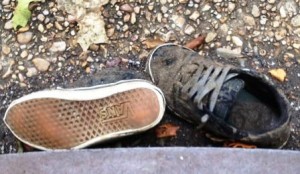 After parking, we made our way to Liuzza’s.  On the way, we noticed a pair of muddy shoes that had been abandoned in the street, a perfect icon for the previous day.  We downed our requisite drinks and headed through the gates.  The wind was blowing and it was very chilly, with overcast skies, and it stayed that way all day.  Because of the mud in all of the grassy spots, it was extra-crowded on the walk ways, and made it more difficult to get around.  This would result in us seeing fewer performers on this day.

The first act of the day for me was The Mavericks, who I’d been wanting to see for quite some time.  I stayed for their whole show at the Gentilly Stage.  I love Raul Malo’s voice!  I have to admit that I don’t know as many of their songs as I’d like to.  I really like “Shine on Me,” which, unfortunately, they didn’t play, but the set was great nevertheless.  It was very Mexican-flavored, and I have a hard time disliking any song that includes an accordion!

After a lengthy wait at the ladies’ rest room (I won’t go into my diatribe about them not turning the lightly-used men’s room into an extra ladies’ room, as they did the previous day when there was a smaller crowd), I exited the grand stands to hear Marcia Ball singing from the Gentilly Stage in the distance.  With a bit of regret, I headed to see Ana Popovic in the Blues Tent instead.  She is always great, and is currently playing with a new, more blues-based band for a side project, as she called it, which has resulted in a new CD.  She has horns and back-up singers with this band.  I’ve heard the CD, and liked it okay, but the band is really good live, and, as usual, it’s refreshing to hear/see a female guitarist with such chops – she rocks it!

Next, it was off to see the legendary Jimmy Cliff at the Congo Square Stage.  Jimmy was in great shape, dancing and jumping like a young man.  He got the crowd involved with some sing-alongs, and played all the songs I wanted to hear.  “Many Rivers to Cross” gave me chills!  Then came “The Harder They Come,” which sounded great, and got the crowd fired up.  As I headed off to see the last bit of Tab Benoit at the Blues Tent, I was compelled to turn back around to witness “I Can See Clearly Now,” which I sang all the way to the Blues Tent.  What an incredible experience!

I got to the Blues Tent in time to hear Tab rock out his last couple of songs, with extended solos, Corey Duplecin bouncing around playing his bass, and guest Jo-El Sonnier playing a mighty fine accordion.  They had to extinguish the flames when this set was over!

After that, it was back to Liuzza’s for one last drink.  There was a band playing on a porch nearby, and some young guys with a tuba, trumpet, drums and other instruments giving an impromptu brass band street concert.  Unfortunately, we had had enough of the chill, and didn’t stay as long as we would have liked.  All we could think of was getting warm, so we left the fairgrounds and headed back to the house.

Later, after rummaging through our available, weather-inappropriate clothing for the warmest items we could find, we met Willie and friends for a fun dinner at Ye Olde College Inn, now located in front of the Rock ‘n’ Bowl.  It was a great, indulgent meal, and our waiter, Jimmy, was very entertaining and professional.  We ended the day on a great note!