On the 20th Anniversary of his Passing 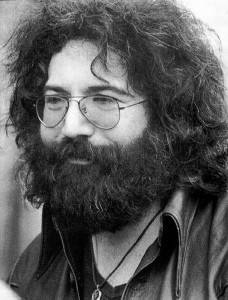 “It is a good thing, I believe, that we lived in the same time as this man did, and it is not likely that we shall see charms or skills so transcendent, and so sustained, again.”
– Mikal Gilmore, Rolling Stone 09/21/95

“Garcia has always been our most improbable pop-culture idol, somebody to whom the playing matters more than the posing. At 51, a halo of gray hair fringing his head and his gray-white beard indifferently trimmed, he resembles the proverbial unmade bed. The merest of filaments divides the man from the performer. His absence of style is a style itself and suggests an inability to abide by anybody else’s rules. Nobody else in the history of rock and roll has ever watched his popularity advance on an exponential curve with each passing year.”   – Bill Barich, The New Yorker 10/11/93

“As word of the death of Jerry Garcia spread (on August 9), via news reports and phone calls and E-mail, the scale of the reaction and the depth of the response quickly surpassed what anyone might have expected. It was suddenly obvious that Garcia had become, against all odds, an American icon: (by the next day,) the avuncular old reprobate had smuggled his way onto the front pages of newspapers around the world. That his battered, ruined body had finally given out was somehow less surprising than the abrupt recognition of how much he had meant to so many. He was eulogized as a rock star and as a guitar god, of course; he was praised as a businessman who marketed his mystique both shrewdly and generously; and, in the obituaries that recounted the intermittent struggles with addiction that preceded his demise, at the age of 53, in a Marin County drug-rehabilitation center, he was inevitably, and with some justice, pronounced a casualty of drug abuse. He transcended show business, and it’s impossible, even now, to think of him as a victim or a sad case. The choices he made in life, whatever their ultimate cost to him, command respect. He was a lyrical hipster, an outlaw with a sense of humor, a fount of profound pleasure for tens of millions of people.”    – Hal Espen, The New Yorker 08/21/95

“Garcia, of course, made his own choices, and whatever they may have cost him, I would argue that in some ways they were still brave, worthy choices. Maybe they were even essential to the wondrous creations of his life’s work. His achievements, in fact, were enormous. He helped inspire and nurture a community that in some form or another has survived for 30 years and may even outlast his death; he co-wrote a fine collection of songs about America’s myths, pleasures and troubles; and, as the Grateful Dead’s most familiar and endearing member, he accomplished something that no other rock star ever has: He attracted an active following that has only grown larger in size and devotion with each passing decade, from the 1960s to the 1990s. You would have to look to the careers of people like Louis Armstrong, Duke Ellington, Count Basie, Miles Davis and Charles Mingus to find the equivalent of Garcia’s musical longevity and growth in the history of American bandleaders.”  – Gilmore, Rolling Stone 09/21/95

“At concerts, Garcia received a star’s ovations whenever he started to sing, and often at the first glimmer of his lead guitar. But he wanted fans to treat him as a musician — to listen above all — and throughout the Dead’s 30-year career he made sure that they did.

“He performed his guitar solos without moving much more than his fingers, and when it was time for vocals, he simply sidled up to the microphone and delivered his part, singing words he did not write. He wasn’t interested in putting personality ahead of the music.

“The tone of Garcia’s guitar, recognizable from just one note, was open and amiable; he might use a wah-wah pedal, but he didn’t make his guitar bite or cut or scream. More often than not, he eased away from the big climaxes that most lead guitarists live for. There was no aggression in his solos, and even when he picked up speed, he phrased with the relaxed tickle of a bluegrass guitarist. His most characteristic mannerism, sliding down a few frets, was the sonic image of someone slipping out of the spotlight. He played the way a dolphin swims with its school; his guitar lines would glide out, shimmer and gambol in the sunlight, then blend into the group as if nothing had happened.”   – Jon Pareles, New York Times 08/20/95

“One night, at Madison Square Garden, Bruce Hornsby — who was playing keyboards (with the Grateful Dead) — pulled us up onstage and sat us behind his piano. We were 10 feet from Jerry Garcia, and you could see how that audience zeroed in on him. He was the focus of everything. There was a synchronicity between the Dead and the crowd, and it was mesmerizing to watch Jerry, in his own understated way, steering that ship — knowing it was a big ship that could barely be steered, but if anybody could steer it, it was him.

“Jerry is still one of the few guitarists where as soon as you hear him, you know instantly who it is. There was a humanity in his guitar work as well as his singing that drew you in. He was a very personal guitarist; he played with more heart and soul than technique.

“As a band, the Dead redefined success. They created this following that grew and grew, and they did it without compromising themselves. They survived in a world where survival didn’t seem possible. They bucked the system and encouraged their fans to do the same: to be free thinkers. There are a lot of Deadheads who were completely different people before they connected with the Grateful Dead.”    – Warren Haynes, Rolling Stone 12/02/2010

“In rock & roll, there is Grateful Dead music and then there is everything else. No other band has been so pure in its outlaw idealism, so resolute in its pursuit of transcendence onstage and on record, and so astonishingly casual about both the hazards and rewards of its chosen, and at times truly lunatic, course.

“For Garcia and the other core members of the Dead, there was no life, and no comfort, without risk. No task was accomplished successfully without some attendant mess and an edifying side trip to the margins. In a music business that prefers expedience to expedition and treats even its most celebrated renegades like errant children, the Dead routinely took the longer, harder route to revelation.

“It was Jerry Garcia’s surprisingly fragile singing and the articulate glass blade stab of his guitar that through the ’70s and ’80s characterized the genial vulnerability and bright, contagious energy of the Dead’s retooled-roots sound. As a solo artist and a frequent picker on other artists’ records, Garcia always took a piece of the Dead’s aesthetic with him wherever he went.

“Garcia and the Grateful Dead could have hung up their rock & roll shoes years ago, content in the knowledge that the band had set a working standard for aesthetic integrity and social responsibility in rock & roll. The Dead established a nation-state of fans who were not mere consumers or devotees but true citizens of the Zeitgeist.

“The broader impact of Garcia’s passing and the probable end of the Dead as a touring and recording unit should not be underestimated. ‘It’s an adventure you can still have in America, just like Neal [Cassady] on the road,’ Garcia said of life with the Dead. ‘You can’t hop the freights anymore, but you can chase the Grateful Dead around. You can have all your tires blow out in some weird town in the Midwest, and you can get hell from strangers. You can have something that lasts throughout your life as adventures, the times you took chances. I think that’s essential in anybody’s life, and it’s harder and harder to do in America.’ ”
– David Fricke, Rolling Stone 09/21/95