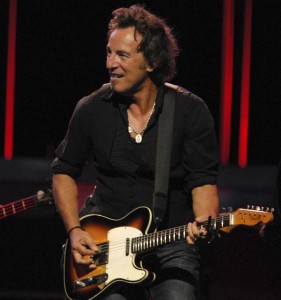 How does he do it? Having just completed a 9-month tour of the U.S and Europe, with shows clocking in at 3-4 hours, here’s how Bruce Springsteen is celebrating his 67th birthday today (09/23) –

— Chapter and Verse, the musical companion to Springsteen’s upcoming autobiography Born To Run, was released. The album is a collection of 18 songs chosen by Springsteen that trace his musical history from its earliest days, telling a story that parallels the one in the book. Chapter and Verse includes five previously unreleased tracks, including two tracks from The Castiles featuring a teenaged Springsteen on guitar and vocals. The Born to Run autobiography will be available Tuesday, 09/27.

— The Boss appears tonight on The Late Show with Stephen Colbert (taped yesterday).

— Springsteen is the cover story for the October 2016 edition of Vanity Fair, with photos by Annie Liebovitz.

— Although he has been relatively inactive during the 2016 political campaign, Springsteen was quoted in a Rolling Stone feature today: “The republic is under siege by a moron…it’s a tragedy for our democracy.”