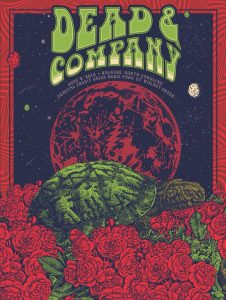 After watching the free webcast of Dead & Co’s (not great) 05/30 show I was ambivalent, but decided to go to Raleigh with no expectations and was rewarded. A few thoughts (and a video of the show). (06/17 update: video no longer available. Link to audio recording below.)

First off – and I’ve thought this since he became part of this band – John Mayer is terrific. Especially so in Raleigh during the “Playing” jam, which could have been pointless noodling but ended up resembling avante-garde jazz. He’ll never step into Garcia’s Black Peter / Wharf Rat persona (who could?), but he’s so talented, has a great attitude and is the missing link / driving force that allowed remnants of the Grateful Dead to become a long-term functional touring unit again. His “Bertha” solo was noteworthy, he single-handedly picked up a “Tennessee Jed” which would have stopped had it been any slower, and he played “Deal” like it was the first & last time he’d ever do it.

Weir was in fine voice and has mostly settled in nicely singing Jerry’s songs. I enjoyed his interpretation and arrangement of “Peggy-O” (interrupted when he called the first (inaudible, acoustic) guitar solo for himself). It’s comforting to see & hear him, along with GD drummers Kreutzmann & Hart.

Overall satisfying setlist (below).  CR&S is one of my favorite show openers; “Throwing Stones” a disappointing choice to start the second set (however lyrically appropriate to current events), which took off nicely after that.  A surprising & fitting “Dear Prudence” – “The sky is blue, It’s beautiful and so are you” was a theme for the day.

“Diamonds” was played for the second time on this tour, with Paul Simon currently on his farewell tour (maybe it will actually be his). There was an audible sigh of appreciation as the crowd recognized it.

Great parking lot scene, before & after the show – wide-open vending (food, shirts, posters, jewelry, etc.) and minimal security, a major change for this venue from 10-15 years ago when goon security drove us all away. The lot remains a giant Jerry tribute, swimming in music from pre-’95 GD shows (and his name & likeness everywhere).

First time on the lawn for me, and it was a beautiful evening & scene – all ages – old friends & new – church. Surprisingly great sound, too. Experiencing that whole scene back in gentle full force, in the amphitheater & in the lots, made the day especially memorable. The “Ripple” encore was a fitting way to punctuate it.