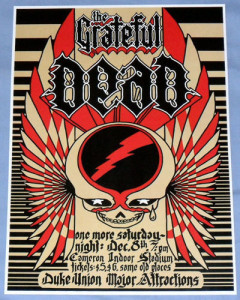 Today marks the 40th anniversary of the Grateful Dead’s epic concert at Duke’s Cameron Indoor Stadium, near the end of the Fall 1973 period which many consider the band’s finest. It’s certainly the greatest musical event I’ve witnessed.

Serendipitously, the strange weather this week created a map which one Tweeter said “Looks like a Dead show.” A Slate article describes the unusual conditions, specifically mentioning Durham (the writer has relatives here). 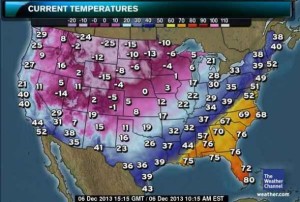 As predicted, Durham’s weather turned nasty today, much like it was on that Saturday in 1973 (cold rain, no snow).

A few recollections from that night. For folks who saw the band during its career, a lot of this will be old hat. This was my first of many Dead shows and I was unprepared for most of it (and amazed by it all). 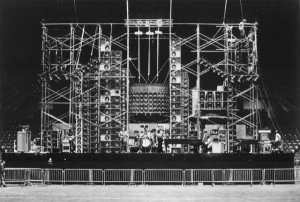 The Wall of Sound. An audio miracle – 26,000 watts of pure analog sound. What does that mean? The photo gives a hint (note the scale with the band on stage, Garcia stage right, Weir right of center). With so many amps and speakers, the band achieved high volume with essentially no distortion (green meters & red lights on stacks of Mac amps were also a nice visual treat).  Phil Lesh’s subsonic bass notes felt like a warm breeze on my pants legs.  The system breathed, sighed & sparkled.  Alas, it proved logistically & financially impractical and lasted only a year and half, taken out of service in October 1974.  I’ve never heard anything else like it.

Dynamics. Making full use of the Wall of Sound, songs would often start like a whisper and build to a thundering crescendo, repeatedly. For hours. As much as the notes they played and the words they sang, the Dead’s use of dynamics created a range of energy & emotion. The Dead & Springsteen mastered this like no one else. 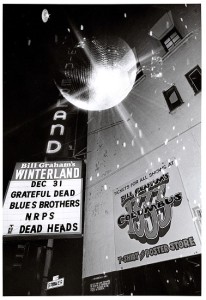 The revolving Mirror Ball. A mostly early-70’s artifact (for the Dead). Just in case the rest of the experience wasn’t taking you over the top, they used this occasionally & judiciously.

No stage talk. Or rarely. On this night, we actually got a memorable rap between sets, encouraging the crowd to “go back to your seats.” You can hear it on a recording of the show here (track 16).

The length of the songs & the show. I recall a John Coltrane interview in which he described responding to Miles Davis’ queries/complaints about the length of Coltrane’s solos – “that’s how long it takes me to say what I want.” That’s how it was 12/08/73. Even for the Dead, this was exceptional.

Two sets. At the end of the long (16-song) first set – as long as most concerts — I was thinking that it was the greatest show I’d seen. I was surprised that the crowd lingered so long, pleased that no one was in a hurry to leave. When I finally asked, I discovered that the band would play another set (which was normal for them). 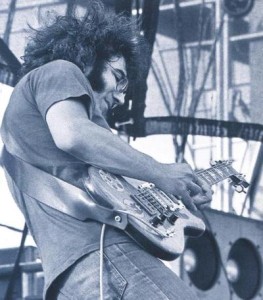 An audio stream of the entire concert (and of individual songs) is available for listening here.

Set 1:
Me and My Uncle
Sugaree
Mexicali Blues
Dire Wolf
Black Throated Wind
They Love Each Other
Me and Bobby McGee
Don’t Ease Me In
The Race Is On
Brown-Eyed Women
Big River
Candyman
Weather Report Suite Prelude >
Weather Report Suite Part 1 >
Let It Grow
China Cat Sunflower >
I Know You Rider