Day 3 arrived with storms and torrential rain.  According to the weather folks, it would pass in a short while, so after a delay in our departure, we headed out with plenty of rain gear for the final day of the first weekend.  By the time we were parked at our spot on Gayoso, the rain was over for the time being.  We made our customary stop at Liuzza’s, and then headed through the gates. 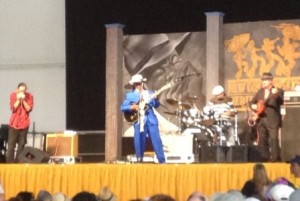 Our first stop Sunday was for food!  The trout baquet was tasty, though the crawfish bisque was unimpressive.  With the growling in our stomachs stopped, we headed to the Blues Tent, where we heard Little Freddie King (a cousin of Lightnin’ Hopkins, no relation to Freddie King).  He is an older, very fine blues guitarist, who is local to the area.  He played a beautiful Gibson guitar, and looked dashing in his blue suit.  I would describe his style as country blues. 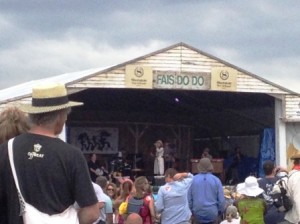 From there, once more we ambled over to the Fais Do Do Stage, and heard the last bit of the Martha Redbone Roots Project’s set.  I had never heard of this group, but Martha has a great voice, and the music is sort of bluesy Americana.  I think I’ll have to get a CD!  I had my first serving of the sausage maque choux while listening to her.  It was smoky and spicy, but maybe a tad salty for my taste.

Next, it was time for Calexico just next door at the Gentilly Stage.  They are reminiscent of Los Lobos and the Iguanas.  Fittingly, one of the guest sax players was Derek Huston, formerly of the Iguanas.  They were upbeat and fun, and I really liked the singer’s voice.  I see another new CD in my future. While listening to these guys, the humidity and maque choux started getting to me, so we decided to head to the Lagniappe Stage to cool off.  It also looked as if a downpour was imminent, so the Lagniappe Stage would be a good place to stay dry.

At the Lagniappe Stage, we caught Kristin Diable’s set.  She is a singer-songwriter, whose voice reminded me of a lot of fine female vocalists – Brandy Carlisle, Adele, and some others I couldn’t pinpoint.  We could see the skies darkening from our covered seats, and the air was getting cooler, until it finally poured as we had expected.  The change in air temperature and some cold water revived me, however.

When the rain let up, we headed to the Blues Tent to try to catch some of B.B. King’s set.  Because of the rain, it was packed, and there were folks setting up their chairs outside the tent.  This was too crowded for me, so we went to the Jazz Tent (against Bruce’s will!).  There was plenty of room there for the set of Jesse McBride presents the Next Generation Big Band.  I was thinking it might be like Glenn Miller or something.  It was not, and Bruce decided to try his luck at the Blues Tent again!  I stayed for the jazz.  As the name of the group suggests, it was a big band of younger musicians, trying to keep the jazz tradition alive in New Orleans.  I thought they were great musicians, though it was definitely a bit loud and raucous at times.

Unfortunately for Bruce, who was watching B.B. from outside the Blues Tent, it started pouring again, so he was forced back to the Jazz Tent for cover.  We listened to a couple more of their songs, and decided it was time to head out.  We considered waiting for the rain to let up, but it didn’t seem as if that were going to happen any time soon, so after staying dry all day, we finally got wet.  Fortunately, it was mostly soaked feet and shoes.  We went straight to the car this time.  There was a long line of cars with folks exiting the festival, but we finally made it to the house.  In all my years of coming to Jazz Fest, I’ve never experienced that much rain in a day.

After changing into dry clothes and shoes, we went out for some Mexican food at the Superior Bar and Grill, not to be confused with Superior Seafood where we went earlier in the week.  It’s a nice, big restaurant, in an older building, with a lot of big windows and a nice patio area.  The patio has garage door windows that can make the place open air, yet make the patio usable during rainy weather, like this evening.  The Mexican food and a great frozen Margarita were just what I needed!  However, after the travails of the rainy day at the fairgrounds, this was our last stop for the evening.  I remember when I could go all night!  But, tired took over, and we headed to the house.  That concluded day 3 of Jazz Fest, and an overall great first weekend.  Now for some rest and sightseeing in preparation for the second weekend!