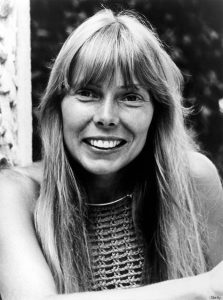 Mitchell has been spotted in public only a handful of times in L.A. since being hospitalized for a brain aneurysm in 2015. Fans were told at the time that she was expected to make a full recovery, but details of her physical health have been kept private in recent years. She reportedly had some involvement planning Joni 75, offering suggestions and approvals.

The Canadian native has recorded 19 studio albums and won nine Grammy Awards, including a lifetime achievement award in 2002. She was inducted into the Rock & Roll Hall of Fame in 1997 and became a companion of the Order of Canada in 2004. Her 1971 album Blue is often cited as one of the best albums of all time; in 2017, NPR ranked Blue #1 on a list of Greatest Albums Made By Women.

An outspoken critic of the music industry, Mitchell describes herself as a “painter derailed by circumstance”.

Kris Kristofferson and Brandi Carlile duet on “A Case Of You”