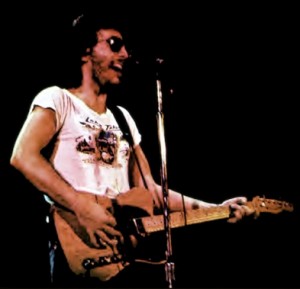 40 years ago today Bruce Springsteen and the E Street Band raised the roof at Duke’s Cameron Indoor Stadium. Cameron, at the time, was a mecca for major acts, an ideal size and acoustically sound, with tiles hung vertically from the ceiling (before they were removed during Cameron’s renovation into the basketball shrine it is today).

The show was the third night of the second leg of the Born to Run Tour, nicknamed the “Chicken Scratch Tour” because of the high proportion of secondary market, southern state locations, and the circuitous routing. Cameron was the largest hall on the tour, and it was my jaw-dropping introduction to The Boss live.

This was also the first and, until 2009, one of only a few Springsteen concerts during which every song from the Born to Run album was played. An audience recording of the show surfaced in 2012 and is available for listening and download here. The roar from the audience at the end of the “Detroit Medley” may be the loudest sound I’ve ever heard (and I’ve seen many basketball games in Cameron).