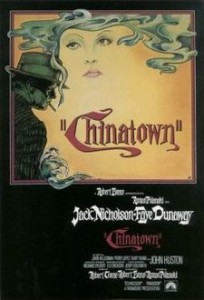 Triangle film fans will be treated to a rare screening of the 1974 neo-noir masterpiece Chinatown, Friday July 5, at the Carolina Theatre in downtown Durham.

The film was nominated for 11 Academy Awards and 7 Golden Globes (it won 1 Oscar – in a year when The Godfather Part II won 6 – and 4 Golden Globes).   In 2010, The Guardian ranked it the best film of all time.  Jack Nicholson & Faye Dunaway have never been better; their interplay is gripping & haunting.   John Huston also stars in his greatest acting role.

The soundtrack to Chinatown is also regarded as one of the greatest scores in movie history.  It ranks ninth on the American Film Institute’s top 25 list of American Film Scores, and filmmaker David Lynch cites Chinatown as his all-time favorite score. *

The brooding tone; the suspenseful, twisting plot; rich Technicolor; masterful acting.  Chinatown is one reason many film historians call the ’70s the “Golden Age of Movies.” The film is part of the Carolina Theatre’s RetroClassics Series.  The evening’s first film, Orson Welles’ Touch of Evil, starts at 7:00 with Chinatown following at about 9:00.

Note:  I’ve intentionally omitted links to an extended plot line.  If you haven’t seen Chinatown, do yourself a favor and don’t read a spoiler plot summary – the surprise is part of the “fun.”