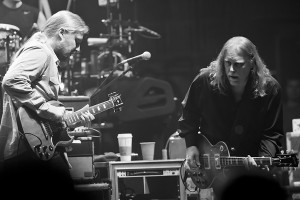 Sad and surprising news for fans of the Allman Brothers Band. Guitarists Derek Trucks and Warren Haynes have announced in a joint statement that they will leave the band at the end of 2014. Trucks said, “I feel that my solo project and the Tedeschi Trucks Band is where my future and creative energy lies,” and that he plans to “spend that rare time off the road with my family and children” (Trucks is married to TTB bandmate Susan Tedeschi). Haynes will focus on Government Mule and his various solo projects.

The announcement came 2 days before the January 10 general ticket sale for the Allman Brothers’ 10-night March run at New York’s Beacon Theatre. ABB and various guests will also play a January 10 Gregg Allman tribute at the Fox Theatre in Atlanta.