So, Day 2 of Jazz Fest.  We got our usual parking spot, and headed toward Liuzza’s.  I had a double Bloody Mary and Bruce had his usual, Jim Beam and Sprite.  While finishing my Bloody, I met a nice little dog named Nola, who greatly resembled Uncle Bob’s dog, Lola.  Four months old, with puppy breath!  Across the street from Liuzza’s, the bougainvillea and magnolias were blooming, and someone had a bountiful garage-top garden in about 6 wooden boxes.  Spring in New Orleans! 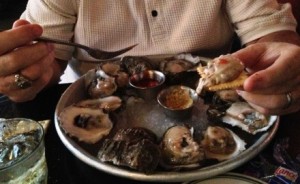 It was definitely more humid Saturday, but it felt appropriate.  There was a nice breeze, however, and it was very sunny.  We entered the gates, and headed to the Lagniappe Stage (real bathrooms, remember).  Bruce got his oysters on the half shell, and I listened to the Panorama Jazz Band while I waited for him.  A nice way to get the day started!  We shared our table with some nice folks from Virginia, formerly, but now from the Park Slope area of Brooklyn – Aaron, Sage and Diana. 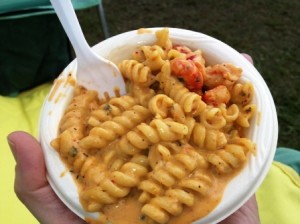 After having a nice conversation with them, and after Bruce finished his oysters, we headed for the Crawfish Monica so I could have my first meal of the day.  It was as delicious as I remembered!  We shared it, so I then had room for some Spinach, Crawfish and Zucchini Bisque.  I downed this all by myself!

The crowd was large on this Saturday.  We contemplated heading to see Allen Toussaint on the Acura Stage, but concluded that the crowd was too large, so headed to the Fais Do Do Stage instead to hear Dwayne Dopsie and the Zydeco Hellraisers.  He plays very fun and danceable Zydeco.  It was still crowded, but we didn’t have to sit on the track!

After our Zydeco fix, we decided to catch Ben Harper and Charlie Musselwhite at the Gentilly Stage.  I already knew Billy Joel at the Acura Stage would be too crowded for my taste, and this was confirmed when I saw a woman with a Billy Joel T-shirt show up for Ben and Charlie at the Gentilly Stage!  Ben and Charlie sounded great.  Their styles really mesh well together.  Very bluesy, with Ben often playing acoustic guitar, and doing some lap style on a couple of songs.  They traded off vocals, and Charlie’s harp playing was as fine as ever.  The crowd was very appreciative and receptive!  Before they were done, however, I decided I really did want to catch at least a couple of Billy Joel tunes, so we made our way to the Acura Stage to end the day.

The crowd was clearing out a little bit, but we still stayed back on the track.  We only heard two or three songs, but one was a version of Iko Iko, which was terrific and unexpected.  Another was Piano Man, which is really all I wanted to hear anyway!  His voice and band sounded great, and of course, the crowd went crazy over that choice.  On the crowded days, you definitely see fewer performers – too hard to move around!  Billy Joel was the last performer, so we headed out, opting to go straight to our car so we could change and go hear more music.

After our stop by the house, we headed to Chickie Wah Wah for Johnny Sansone’s CD release and a harmonica jam.  This was our first time at Chickie Wah Wah.  It was a very friendly and casual place, and the music was superb.  Johnny is always fun, and the songs off his new CD sounded great, so we bought a CD, of course.  All the guest musicians were fabulous as well, including John Fohl, formerly guitarist with Dr. John’s band.  We did manage to stay out past midnight this time, but called it a day shortly thereafter.  A very fun Day 2 was over.