The first day of the second weekend in New Orleans arrived with rain and mud.  It had rained the last couple days, so the mud at the festival was extreme.  After parking and introducing my friend Debbie, who had joined us for weekend two, to our Liuzza’s tradition, we headed to the gates, rain gear in tow. 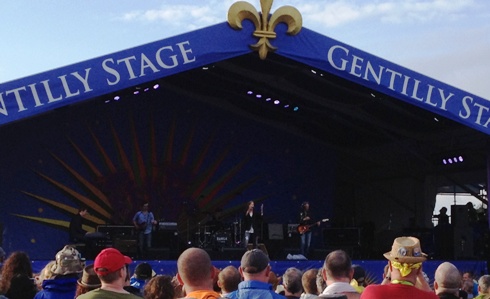 Our first stop was the Blues Tent, where we caught a few songs by Drink Small, an artist with the Music Maker Relief Foundation out of Hillsborough, NC.  Bruce then stuck around the Blues Tent for Jumpin’ Johnny Sansone’s set.  Debbie and I split up and went wandering.

My next stop was at the Gentilly Stage to catch Meschiya Lake and the Little Big Horns.  This is a jazz band, with red-headed lead singer Meschiya Lake providing high-energy antics out front, along with strong, interesting vocals.

After Meschiya Lake’s set, I caught the last bit of Rosie Ledet at the Fais Do Do Stage, which brought back memories of her shows at the now-defunct Blue Bayou Club in Hillsborough, NC.  It’s hard to believe she could fit all that excitement into that small venue back then!

Next, time for some lunch – crawfish bread and fried chicken for the first course.  Later, a taste of Debbie’s fried green tomatoes and more maque choux rounded out my culinary experience for the day.  Our approaches to the food vendors had to be carefully planned, to avoid the muddiest spots!

After replenishing my energy supply, it was off to see Theresa Andersson at the Gentilly Stage. I had been wanting to see her for a while, and was not disappointed.  She had a band with her, but has become known for using a drum machine and live looping technology.  She’ll be pushing buttons with her bare feet, while singing with her own vocals looping around, and sometimes playing a violin or other instrument as well.  It’s very interesting to watch.  She did this at least once in the set, with her band members backstage and her alone.  She was fun and very animated, and I’m glad I finally witnessed her live in action!

I then headed next door, back to the Fais Do Do Sage, to catch up with Bruce and see a bit of Pokey LaFarge.  This band plays old-timey jazz that sounds likes it’s from the 30’s or 40’s, and they dress the part.  They were really fun!

After that, my highlight of the day was Patti Smith, back at the Gentilly Stage.  It had been raining off and on all day, and had gotten fairly chilly, but, 20 minutes into Patti’s set, the sun came out, washing the crowd in that warm, magical light of late afternoon.  And Patti was fabulous!  You could tell she was having fun, dancing and hopping all over the stage, as she bathed us with her intense, moving poetry.  Her voice sounded as good as it always has.  The most memorable songs of the set, for me, were “People Have the Power,” “Because the Night” and “Gloria.”  She had the crowd riveted, and totally made my day!

I met Bruce and Debbie back at the Blues Tent, and we headed out for the day.  On the way, we found a nice, fairly clean mud puddle where we were able to get some of the mud off our shoes before getting into the car.

After going home to change, we met our friends, Willie, Robin, Stuart, Trudy and Dale, who had recently arrived, for an evening of Zydeco at the Rock ‘n’ Bowl.  The bands included Rosie Ledet and the Zydeco Playboys, Chubby Carrier and his Swamp Band, and Geno Delafose and French Rockin’ Boogie.  The whole place seemed to be on the dance floor!  However, before it was over, we ran out of steam, and went home to rest up for the next day.