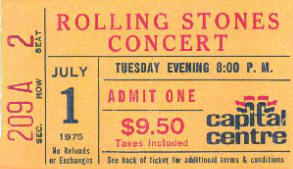 Rolling Stone’s Andy Greene opines today on the 10 Most Annoying Rock Star Behaviors.  Although I’m a dissenter when it comes to Greene’s distaste for solos (aren’t creative, in-the-moment solos integral to live music?), I think he’s spot on about varying setlists and, especially, the problem with high ticket prices (I’d set the bar well below his $300 for prices that are way too high — but I’m in NC and he’s in NYC).  From the article (emphasis mine):

Ticket prices:
“We know the concert industry is a business, and with record sales sinking to new lows every year, it’s just about the only place where artists can make real money. That said: tickets shouldn’t be $300 unless those seats are actually on the stage. Meet-and-greets should be nice perks for your most devoted fans, not ways to squeeze more money out of people – some acts actually charge upwards of $1,000 for a quick handshake and a photo. We know scalpers get a lot for tickets, but the way to stop that is by using paperless tickets, not by matching their insanely high prices yourself, artists.

“This isn’t just an idealistic position: soaking your fans is also bad business. Because touring is more important than ever, you’re going to need a loyal fanbase that doesn’t resent you for making their kids skip college so they could see you in Newark. Wise up, rockers!”

Setlists:
“A concert shouldn’t feel like a Broadway show. It should feel like a unique experience, but some acts drag the same exact show around the globe for 18 months and never alter one note of it. Some acts feel they have figured out the perfect setlist that tells some sort of a story and builds to a series of climaxes. Do not believe them. There is no such thing as the perfect setlist. It should be constantly evolving.”