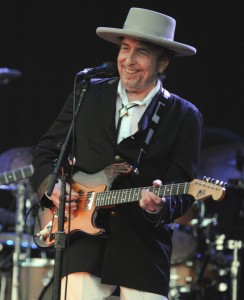 From a New York Times report –

Singer / songwriter Bob Dylan was awarded the Nobel Prize in Literature on Thursday for “having created new poetic expressions within the great American song tradition,” in the words of the Swedish Academy.

He is the first American to win since the novelist Toni Morrison, in 1993. The announcement, in Stockholm, came as something of a surprise. Although Dylan, 75, has been mentioned often as having an outside shot at the prize, his work does not fit into the traditional literary canons of novels, poetry and short stories that the prize has traditionally recognized.

“Mr. Dylan’s work remains utterly lacking in conventionality, moral sleight of hand, pop pabulum or sops to his audience,” Bill Wyman wrote in a 2013 Op-Ed essay in The New York Times arguing the case for Dylan’s getting the award. “His lyricism is exquisite; his concerns and subjects are demonstrably timeless; and few poets of any era have seen their work bear more influence.”

The Nobel, one of the world’s most prestigious and financially generous awards, comes with a prize of 8 million Swedish kronor, or just over $900,000. The literature prize is given for a lifetime of writing rather than for a single work.

What to Know About Bob Dylan’s Nobel Prize for Literature

Springsteen on How Dylan’s Work “Pointed True North” in America