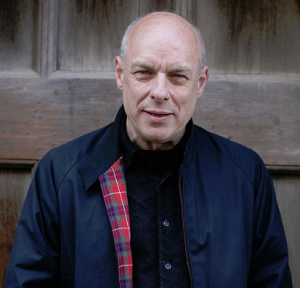 In a thoughtful & optimistic New Year’s Day Facebook post, Brian Eno recaps 2016 and calls for action & engagement in 2017. The English musician, composer & producer is best known for his pioneering work in ambient and electronic music. In 1996, Eno and others started the Long Now Foundation to educate the public about the very long-term future of society. He is also a columnist for the British newspaper The Observer.

The consensus among most of my friends seems to be that 2016 was a terrible year, and the beginning of a long decline into something we don’t even want to imagine.

2016 was indeed a pretty rough year, but I wonder if it’s the end – not the beginning – of a long decline. Or at least the beginning of the end….for I think we’ve been in decline for about 40 years, enduring a slow process of de-civilisation, but not really quite noticing it until now. I’m reminded of that thing about the frog placed in a pan of slowly heating water…

This decline includes the transition from secure employment to precarious employment, the destruction of unions and the shrinkage of workers’ rights, zero hour contracts, the dismantling of local government, a health service falling apart, an underfunded education system ruled by meaningless exam results and league tables, the increasingly acceptable stigmatisation of immigrants, knee-jerk nationalism, and the concentration of prejudice enabled by social media and the internet.

This process of decivilisation grew out of an ideology which sneered at social generosity and championed a sort of righteous selfishness. (Thatcher: “Poverty is a personality defect”. Ayn Rand: “Altruism is evil”). The emphasis on unrestrained individualism has had two effects: the creation of a huge amount of wealth, and the funnelling of it into fewer and fewer hands. Right now the 62 richest people in the world are as wealthy as the bottom half of its population combined. The Thatcher/Reagan fantasy that all this wealth would ‘trickle down’ and enrich everybody else simply hasn’t transpired. In fact the reverse has happened: the real wages of most people have been in decline for at least two decades, while at the same time their prospects – and the prospects for their children – look dimmer and dimmer. No wonder people are angry, and turning away from business-as-usual government for solutions. When governments pay most attention to whoever has most money, the huge wealth inequalities we now see make a mockery of the idea of democracy. As George Monbiot said: “The pen may be mightier than the sword, but the purse is mightier than the pen”.

Last year people started waking up to this. A lot of them, in their anger, grabbed the nearest Trump-like object and hit the Establishment over the head with it. But those were just the most conspicuous, media-tasty awakenings. Meanwhile there’s been a quieter but equally powerful stirring: people are rethinking what democracy means, what society means and what we need to do to make them work again. People are thinking hard, and, most importantly, thinking out loud, together. I think we underwent a mass disillusionment in 2016, and finally realised it’s time to jump out of the saucepan.

This is the start of something big. It will involve engagement: not just tweets and likes and swipes, but thoughtful and creative social and political action too. It will involve realising that some things we’ve taken for granted – some semblance of truth in reporting, for example – can no longer be expected for free. If we want good reporting and good analysis, we’ll have to pay for it. That means MONEY: direct financial support for the publications and websites struggling to tell the non-corporate, non-establishment side of the story. In the same way if we want happy and creative children we need to take charge of education, not leave it to ideologues and bottom-liners. If we want social generosity, then we must pay our taxes and get rid of our tax havens. And if we want thoughtful politicians, we should stop supporting merely charismatic ones.

Inequality eats away at the heart of a society, breeding disdain, resentment, envy, suspicion, bullying, arrogance and callousness. If we want any decent kind of future we have to push away from that, and I think we’re starting to.

There’s so much to do, so many possibilities. 2017 should be a surprising year.