Finally, a day without rain!  We awoke to beautiful blue skies with no clouds in sight.  The air started out a little chilly and soon warmed up.  We got a late start, so our regular street parking spot near the New Orleans Fair Grounds was taken, but we found another one nearby and headed to Liuzza’s for our pre-festival drinks.

On our way to the gates, we ran across some folks who had just put out a big batch of boiled crawfish, potatoes and corn, which they were sharing with anyone who walked by.  It was still steaming and looked fabulous, and Debbie enjoyed some before we continued on our way. 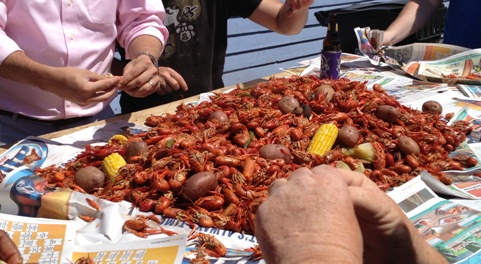 Crawfish boil outside the Fair Grounds

Once inside the gates, we encountered huge crowds everywhere.  Deep mud from days of rain made many of the usual spots for standing and walking inaccessible, concentrating the already-dense crowd.

The first performer we attempted to see was Eric Lindell at the Blues Tent.  It was too packed to get inside, and, even outside, the large crowd prevented us from seeing the stage, so we decided to head elsewhere.  That proved difficult, since the entire crowd was confined mainly to the walkways.  Getting to stages, food booths and other sites around the festival involved meandering around large, impassable muddy areas, and gingerly crossing the ones that weren’t quite as bad.  My mood was deteriorating rapidly.

However, we finally made it to the Fais Do Do Stage where The Little Willies, one of Norah Jones’ bands, were playing.  This was also packed, and we could barely see the band, but we found a spot for our chairs and at least were able to hear the music.  We did have some maque choux while seated, which was a highlight.  And The Little Willies sounded great.  I managed to see enough to recognize that Norah played piano the whole time, and they did a nice version of Kris Kristofferson’s “For the Good Times.”

After that, we worked our way through the crowd back to the Blues Tent to hear Los Lobos.  Once again, we were unable to get inside, and couldn’t get close enough to see into the tent, given the contrast between the outside brightness and inside dimness.  Bruce found a place to set up his chair which satisfied him, but I decided to check the crowd at the Jazz Tent, where Stanley Clarke and George Duke were playing.

I found a decent spot on the far side of the tent, outside, which wasn’t as crowded and where I could finally see on-stage.  The music was good, especially the jazzier pieces, but the R&B and funk didn’t interest me, so I headed back to the Blues Tent to catch the end of Los Lobos.  The crowd had cleared out a bit, and, although we were still outside, we were close enough to see the band.  They did a great “I Got Loaded” and closed with “Bertha.”

By this time, the temperature was around 59°, and we were all chilly, so we headed out.  After a quick stop at Liuzza’s, we left to get ready for our 9 p.m. dinner reservations at Redemption, a restaurant in a renovated former church.

This day had been the most frustrating.  The weather was great, but the crowds, concentrated by limited usable space, made it hard to get around, resulting in us “seeing” only three bands.  A 40-minute wait in the ladies’ restroom line didn’t help.

After rummaging through our clothes for something approaching long sleeves and long pants to warm us up, we had a wonderful dinner at Redemption.  It must have been a beautiful church, because the restaurant featured stained glass, large cathedral windows, high, beamed ceilings and a lot of old wood.  I think the bar area was formerly the confessional!  After a frustrating day, the dinner did not disappoint.  That was it for the day, however.  After dinner, we went straight home to get some sleep in preparation for our final day.