The final day of Jazz Fest was bright, sunny and warm.  Since Debbie wanted to see David and Roselyn, a street band from New Orleans that she had befriended years ago, we headed out earlier than usual (the band started at 11:30).  After dropping off Debbie at the Fair Grounds gate, and finding our usual street parking spot available, we stopped at Liuzza’s for our final pre-Fest drinks, then entered the gates and joined Debbie for the last of David and Roselyn at the Kids Tent. 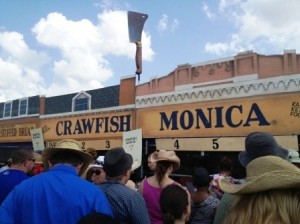 Next, over to the Grandstand area for oysters and music on the Lagniappe Stage.  It was a bit chilly in the shade, but we found a sunny table which was perfect.  While Bruce waited in line for his oysters, we listened to The Grayhawk Band on stage.  They seemed to have a little Native American sound at first, but sounded jazzier as we heard them more.  Whatever their sound, it went great with Bruce’s oysters and my beer!

Bruce and I then went to the Fais Do Do Stage where Feufollet, a young Cajun band, was playing.  We noticed on the way that the mud had dried up quite a bit in most spots, and the crowds were definitely thinner.  After setting up at Fais Do Do, I headed next door to the Gentilly Stage to see Irma Thomas, The Soul Queen of New Orleans!  It was crowded, but I found a decent spot where I could stand and see.  She put on a great set!  The crowd was very enthusiastic, and I struck up a nice conversation with a woman from New Orleans, Janice, standing next to me.  At one point, Irma had the entire crowd waving white hankies (i.e., napkins) as she sang several second-line-inducing songs!  The music, the spectacular weather – warm, low humidity with a nice breeze – and the thinner crowds, which allowed me to easily hop from one stage to another, had me in a much happier mood than on the previous day.

After Irma, I made my way back to the Fais Do Do Stage to check in with Bruce.  While he stayed put, I headed over to the Jazz Tent to catch some of John Boutte’.  It was crowded inside, so I went to the far side of the tent again, and found a good spot, just barely outside and with a nice view.  John Boutte’ has a great voice, kind of gravelly and sexy!  He sang some nice jazz standards, and then blew me away with his version of “Hallelujah.”  This is the Leonard Cohen song probably best-known for the heart-wrenching version by Jeff Buckley.  John Boutte’s rendering made me cry and gave me chills!  It was beautiful and touching.  He also played the Treme’ theme song, which was great.  I was happy I made the decision to see him!

I then joined Bruce, who had settled in at the Blues Tent.  I caught a little bit of Walter “Wolfman” Washington before heading to the Economy Hall Tent, where I found a good seat and settled in to hear Pete Fountain.  Pete’s health has been on the decline since he lost some cherished items during Katrina, according to Janice, the woman I met at the Gentilly Stage.  He was in a walker seat, and another band member did most of the clarinet work.  However, Pete did play some, and did walk off without the walker, with some assistance.  It made me sad, but I was glad to see him.  Several second lines broke out during his set, with umbrellas, sashaying and all, especially exuberant during “When the Saints Come Marching In.”  Really fun and uplifting!  The whole day was feeling like the opposite of the previous day.

I’d heard good things about the New Orleans Klezmer All-Stars, so I headed to the Lagniappe Stage to hear them next.  Their music was fun and entertaining, and the band included an excellent accordion player.  However, Debbie texted me about the show happening at the Fais Do Do Stage, The Del McCoury Band with Preservation Hall Jazz Band, so I went to meet her there.  She had set up in a nice location, fairly close, centered between speakers, with an excellent view of the stage.  I was glad I heeded her advice.  What a combination, jazz and bluegrass!  The bands were terrific together, and they also took turns playing separately.  The smile on Del McCoury’s face was contagious!

As their set neared completion, I decided to catch a little of Taj Mahal and headed to the Blues Tent, where Bruce was seated.  As usual, Taj sounded great.  He had a group of tuba players with him, in addition to his regular band.  It was a fine way to end our final day.

Leaving the Fair Grounds, I felt that tinge of sadness I always feel when Jazz Fest is over.   Bruce, Debbie & I headed straight to the car, since we had plans to catch Tab Benoit, Sonny Landreth and Jonathan “Boogie” Long that evening.

We changed clothes at the house and drove to the Rock ‘n’ Bowl, where we joined Willie, Robin and folks.  Jonathan “Boogie” Long got the evening started.  He is a great, young, up & coming blues guitarist, with a good, bluesy voice.  However, Sonny and Tab were who we really wanted to see!  Sonny played a fiery set as usual, his slide screaming across the strings.  Willie, being a guitarist himself, seemed mesmerized by Sonny’s expertise and technique.

After Sonny’s set, Tab and his band took the stage.  Tab plays upbeat, invigorating, danceable blues, and is just fun!  He’s also ridiculously handsome, and his accent could melt butter.  Everyone was dancing and smiling!  Then he called a surprise guest guitarist to the stage – John Oates!  Hall and Oates had played at the Fair Grounds earlier.  Oates played guitar along with Tab, taking some solos, and he was fabulous!  I had never seen him before, and was pleasantly surprised.  He’s released several bluesy albums in recent years, so it wasn’t really a stretch.  Although it was a very good set, we were driving to Austin the next day and had to leave before it was over.

That concluded our musical adventure for Jazz Fest 2013.  As always, I didn’t want it to end.  It was a great festival, mud and all, and I hope that I’m able to continue to experience it every year.